The year Orwak was founded! The business concept built on the idea of safe and clean waste compaction and the first in-bag-compactor Orwak 5030, a patented solution, was invented and displayed at major exhibitions in London and Paris.

The year when Orwak went international! Several distributors were established in Europe and the start of Orwak UK was a success from day one. Orwak were committed to giving its customers the possibility of sorting and compacting in one machine and the models Orwak 5032 and Orwak 5033 were born.

The first big baler was designed and Orwak was the pioneer in marketing a unique concept – the Multi Chamber Baler. This system later became a huge success that contributed to Orwak’s continued growth worldwide.

Orwak conquered the supermarket business in the UK. All major target groups chose our unique multi-chamber-baler model 8020 and thousands of units were installed! A number of new markets and distributors were developed.

Orwak USA Inc. was inaugurated. The unique trash compactor Orwak 5030 was readily accepted by major fast food companies, restaurants and hotels. Model Orwak 8010, the fastest down-stroke baler in the world with a cycle time of just 10 seconds, was born!

The French market was first to demand a compactor for plastic bins and Orwak was first again, introducing its simple but effective in-bin-compactor model Orwak 4000.

In 1998 Orwak started a sales company in Poland – a promising future market!

When acquiring Morinders and Presona, we formed Orwak Group and after a couple of years, Brickman was fully integrated in the Orwak-assortment.

New products were launched and at The Cologne Fair in 2003, Orwak revealed its latest development, the attractive and low-built Orwak 3300 baler.

In 2007 Orwak introduced the concept “The Silent Family” when a new line of front-loaded balers with silent operation replaced several classic models. Two years later the twins Orwak 3105 und 3110, with extra small footprint, were added to the family.

TOM, a new waste compaction system for public spaces with a lot of foot traffic, were introduced to the market.

With the Power of experience behind us, strong dedication at heart and innovative ideas in mind, we are looking forward to a Bright Orange Future with You! 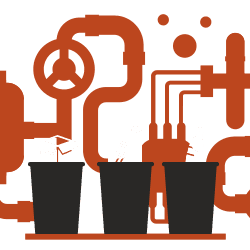 Try Orwak´s selector tool!
Choose your material and view the best solutions for your needs!